Puppies' socialization with other dogs

Puppies get some raw chicken necks now as part of their diet. Most of the pups have well developed teeth and given time they can crunch the necks up. 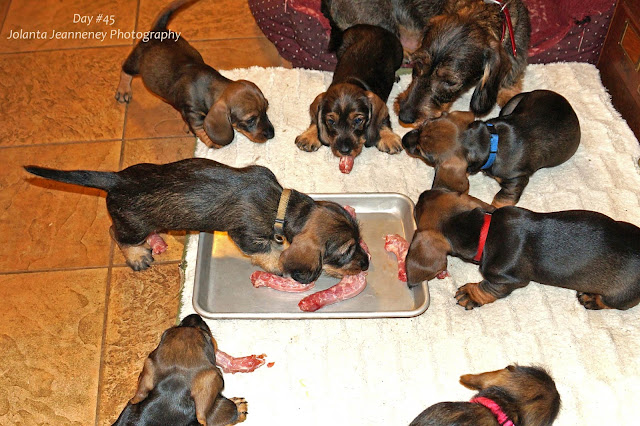 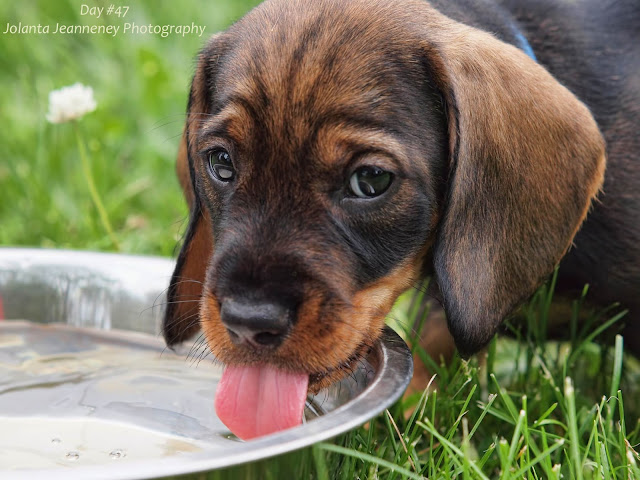 The pic below shows puppies with our Bernie. He is a 7.5 year-old neutered male, who helped raise a lot of litters. Bernie is perfect for this job and it is his role in the family. He is not as permissive as Mielikki (she lets pups get away with murder), but is also very stable and reliable.

Pups had a really nice day today: socialization with adult dogs, a long walk in the field and individual work on a deer liver drag. We were really pleased with what we saw. 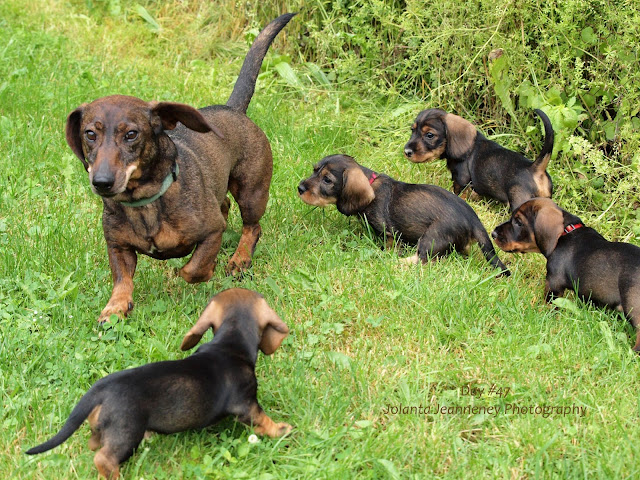 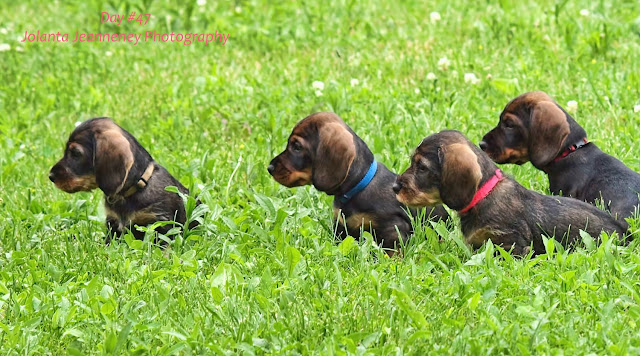 Puppies first outing to the pond

Puppies turned six weeks old on Friday. Their curiosity is expanding and they seek new experiences. Therefore, when on Sunday afternoon the temperature hit 93F, we decided to take puppies to the pond. We have never exposed pups to the water at such an early age. But Mielikki loves to swim and we thought she would have a good influence during their first outing to the pond. So we loaded pups into two crates and drove to the edge of the pond. It is not too far from our house, but it was too hot for them to walk such a distance.

You can see from the video what happened next. Some pups were more ready for this new challenge than others; Uncas was a star of this show and swam like an otter. Mielikki was great; she swam a lot but also kept a close eye on her pups. What a great mother she has been.

After all the pups got wet, we let them run back to the house.
One might ask why we go into such a length and trouble to give our pups experiences like this one. We firmly believe that in the long run it is very beneficial for the pups to be challenged and offered enriched environment during this developmental stage. They will have better coping and social skills when they have to deal with mild stress. Puppies' rate of mental development depends on the complexity of their environment. We don't push our puppies too far, that's for sure, but it is really important to stimulate their brains and bodies at this stage. 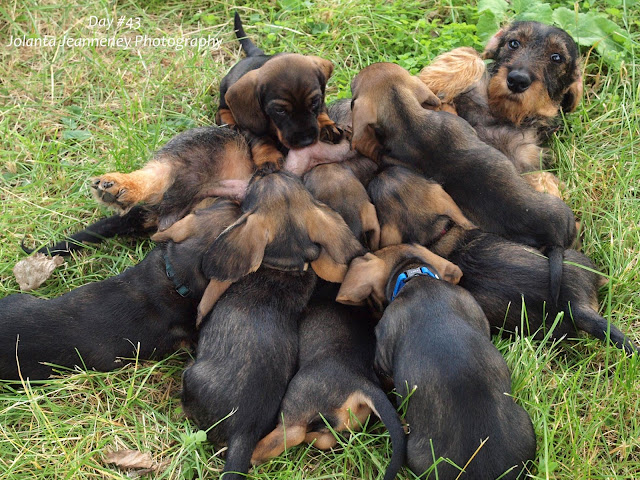 On Saturday Mielikki and Sky visited pups in their pen attached to the shed. Pups still occasionally nurse and Mielikki is fine with this. So they mobbed her and pulled her down. Sky was just an observer!

Other things we are teaching pups include being accustomed to a crate. They have been familiar with crates for a long time, but now we bring them to the house and put a couple of pups to a crate. We let them stay there for a couple of hours. They protest for the first few minutes, but after that they just go to sleep.
Posted by Jolanta Jeanneney at 4:09 PM 1 comment: 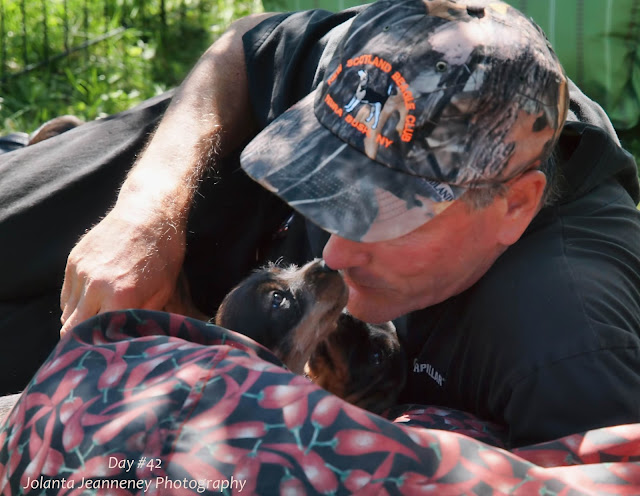 Now that pups are 6 weeks old, it was a huge relief to see that they do not miss any teeth and their bites are correct. Also both male puppies have their testicles down. We could not be happier with the breeding!
Posted by Jolanta Jeanneney at 10:50 AM 1 comment:

We have been spending a lot of time with puppies. Watching them is good for my soul. In this world filled with tragedy and sad news, this is the best therapy you can have!

Yesterday puppies went for their first car drive. Also they spent their first night outside in our shed. They basically outgrew my den, and this time we have avoided setting up a pen filled with wood chips. Now, almost at six weeks they are ready for a more advanced set up, which was described here. One of the dog houses in the shed is heated and we turned the heat on as last night temperature dipped to low 40s. Around midnight Mielikki insisted that she needed to be with them so we let her do it. As it turned out she chewed off one of the puppy collars so I don't think we will let her spend another night with them. She continues to be just an extraordinary mom and still insists on cleaning them. Their diet now is part solid food and part Mielikki. 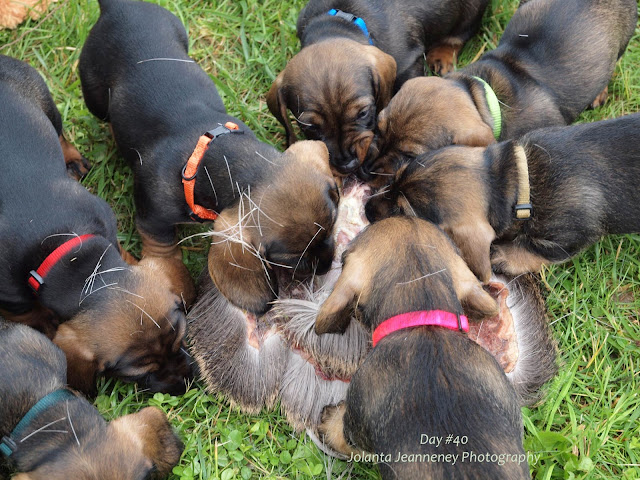 Posted by Jolanta Jeanneney at 10:48 AM No comments:

We are in the middle of puppies' 6th week of life. This is when they experience many situations and things for the first time. Actually they crave new experiences and we are happy to oblige. 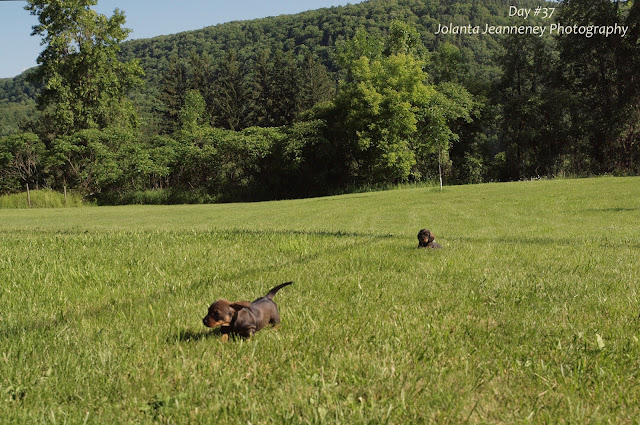 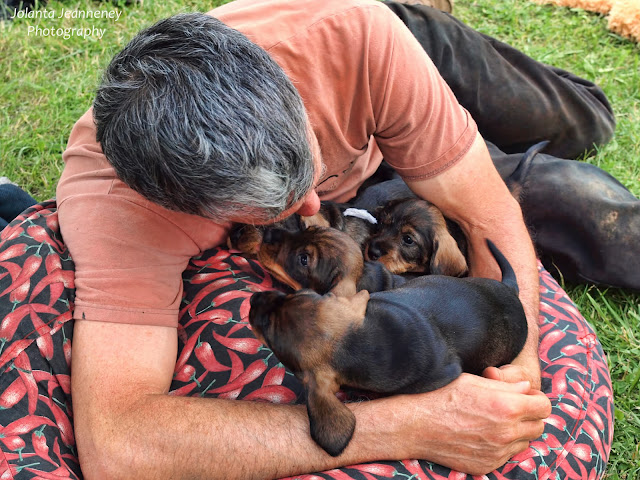 We really like what we see in the pups. They are outgoing and intelligent, nose oriented. They will be staying here for five more weeks and will get to know them better on the individual basis. Their personalities start to emerge, that's for sure.
Posted by Jolanta Jeanneney at 5:23 PM No comments:

Apparently we have gotten ten inches of rain in the last couple of weeks. Well, it was raining today again. As you can see in the video puppies had a lot of fun in our kitchen/dining area. The background music was entertaining and included some rain forest birds.

We started to supplement pups with some extra food, but Mielikki still insists on cleaning them. I have never seen such a clean freak canine mom! Also, she loves to play with her pups, and she started to let them know that some toys such as her ball are off-limits. But she does it gently and never growls or snaps at the pups. 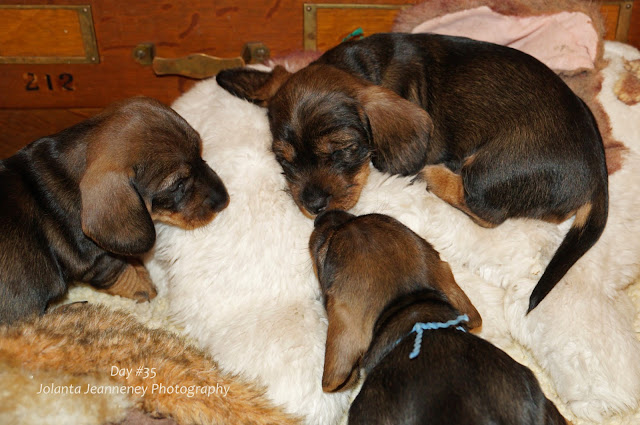 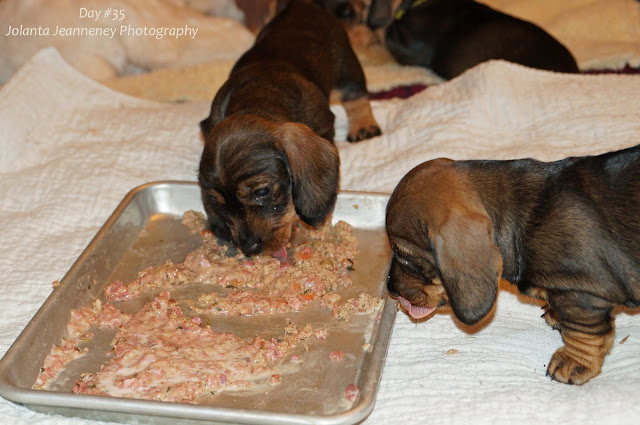 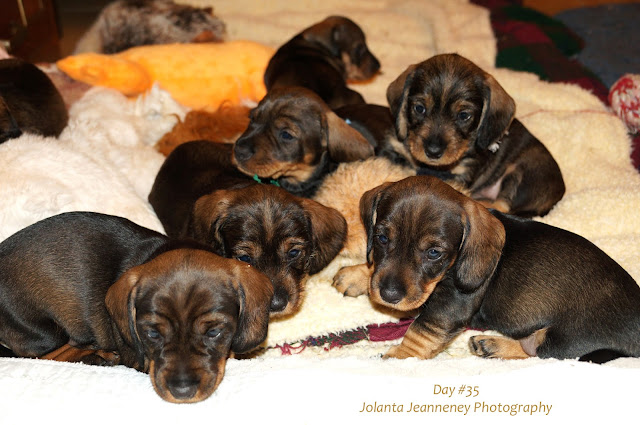 Posted by Jolanta Jeanneney at 11:22 PM No comments:

Another rainy day. Asko visits puppies for the first time.

Another rainy day so puppies are upstairs in our kitchen listening to the radio :-) 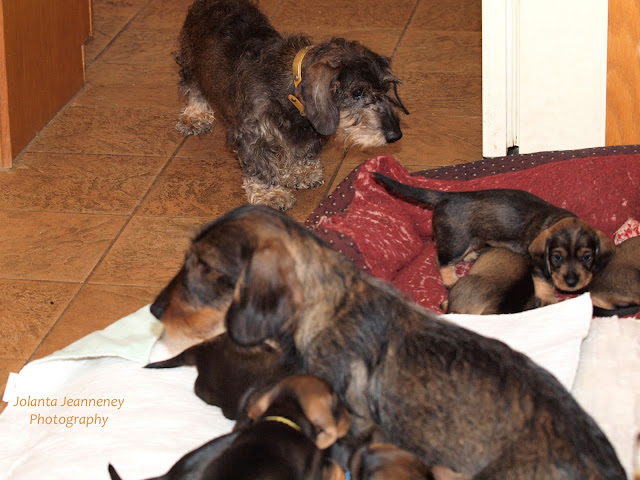 Fourteen-year-old Asko came to visit his great-great-great-great grandchildren. The lineage goes like this: Asko-->Elli-->Billy-->Keena-->Paika-->Sky-->U-puppies. Mielikki could care less. The only thing she was concerned was her ball as this was what Asko was looking for! Puppies tried to get some milk out of Asko but failed miserably. 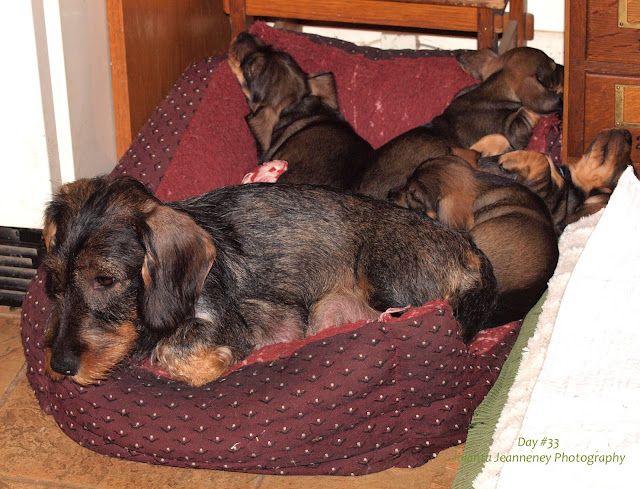 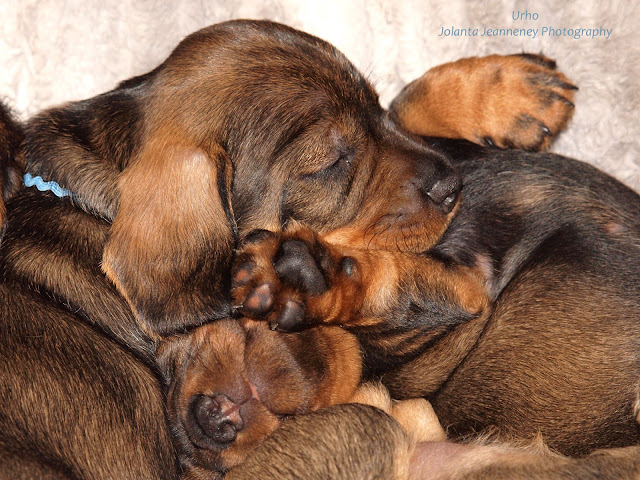 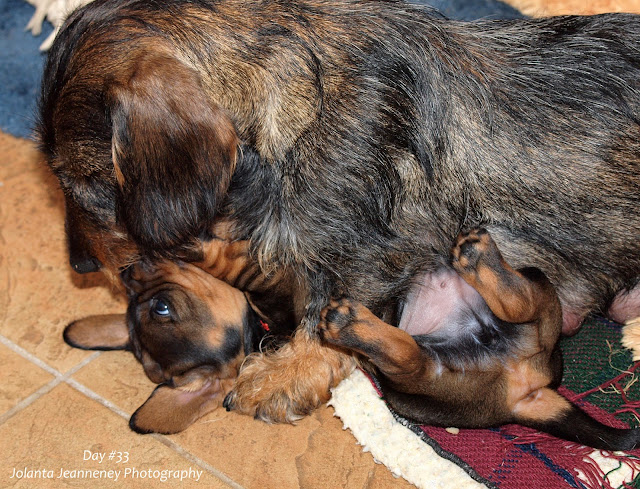 Mielikki has started to play with her puppies, and they are ready for it. Here Uncas gets pinned to the ground.
Posted by Jolanta Jeanneney at 3:15 PM 1 comment:

Yesterday we had a great summer weather and pups enjoyed the outdoors. We had to mow our front lawn so they got exposed to the mower's roaring sound. Today everybody stays inside. It has been raining quite heavily and we can't expect any improvement until tomorrow night...maybe. Mielikki is determined to let puppies nurse so we are letting her do that. She has been "processing" a lot of food! At this age of 4.5 weeks we can see quite a difference in coats and other features. While both males are going to have excellent coats,females show a pretty wide range of coat texture and length. They all seem to have very outgoing personalities :) Some pups, the ones with shorter coats, have their incisors and canines ou,t and so far the bites and number of teeth look OK. 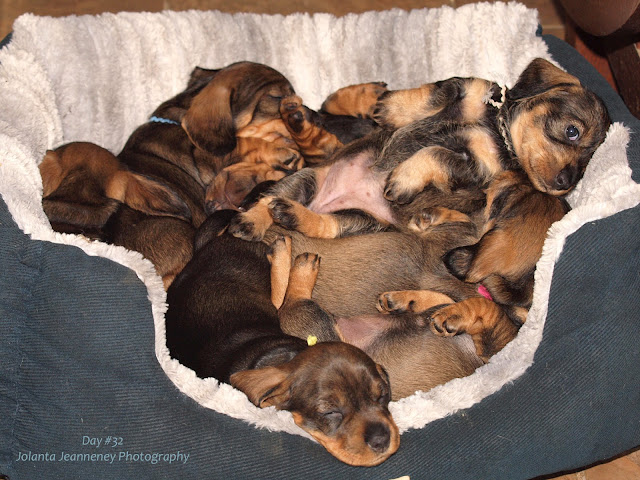 Posted by Jolanta Jeanneney at 3:30 PM No comments:

It has been raining now for three days so puppies spend all of their time in the house. The whelping box is in my den and they still sleep there during the night. During the day I let them play outside the box, and also they spend some time upstairs in our kitchen/dining area. They have to get used to every day noises made by fridge, microwave oven, dishwasher, blender etc. We have not introduced them yet to a vacuum cleaner but that's coming soon.

Posted by Jolanta Jeanneney at 9:12 AM No comments:

Puppies get into Mielikki's food!


Another video of Mielikki shot yesterday. We feed our dogs premium dry food and raw diet, mainly venison and raw mixes that we buy from Omas Pride. I would have never considered Mielikki a fussy eater...until she got pregnant. Two weeks into her pregnancy she stopped eating dry food altogether and showed a clear preference for "real food". She has access to dry kibble in case she gets hungry, but most of the time she does not touch it. The video shows puppies' reaction to Mielikki's food.
Posted by Jolanta Jeanneney at 8:13 PM No comments:


Today for the first time we heard some of the puppies, who expressed themselves loud and clear. The video was shot in my den, where puppies can play under my desk. It was dark there so the quality is not the best, but it is a cute video.
Posted by Jolanta Jeanneney at 3:51 PM 1 comment:

Enriched environment is very important for the development of young puppies

When weather allows it puppies spend part of their days in a pen on our front lawn. We try to provide enriched environment for them so they are exposed to new smells, sounds and objects. When you look what is inside the pen, you'll see in addition to regular toys and beds a cardboard box, aluminium tray with water, rubber mat, apple, cast iron and rubber boot scrapers, crate etc. But the puppies are still very young babies so they spend most of their time just sleeping. On Sunday our friends dropped by to play with the pups but pups were asleep for almost the whole duration of the visit! 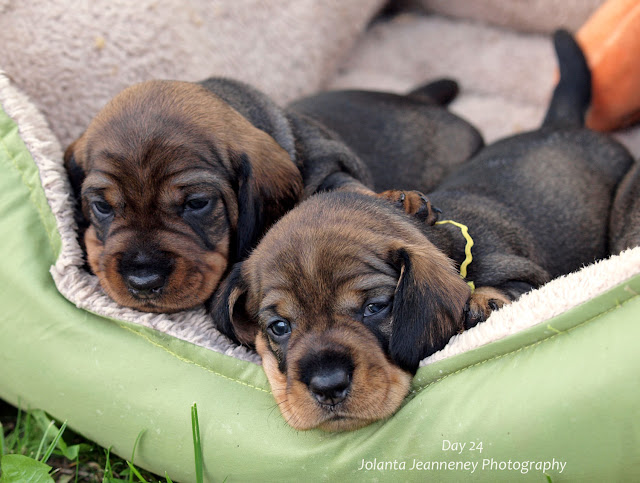 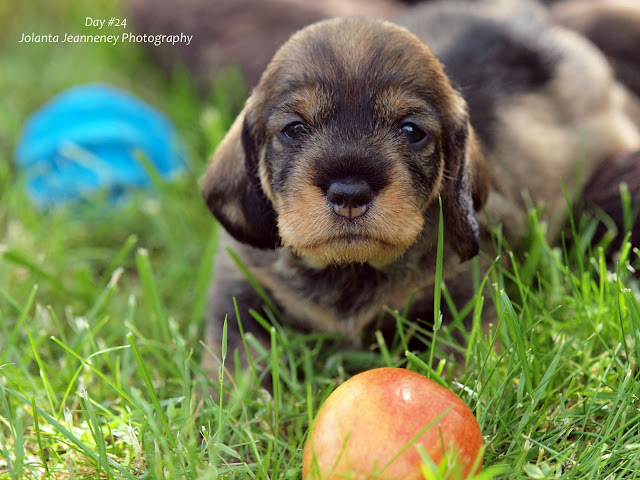 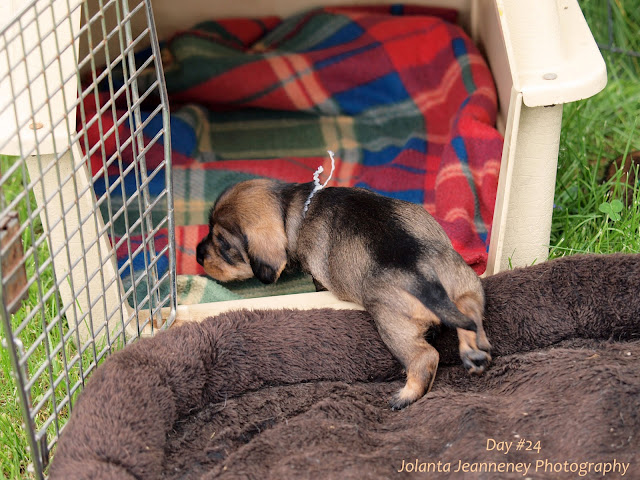 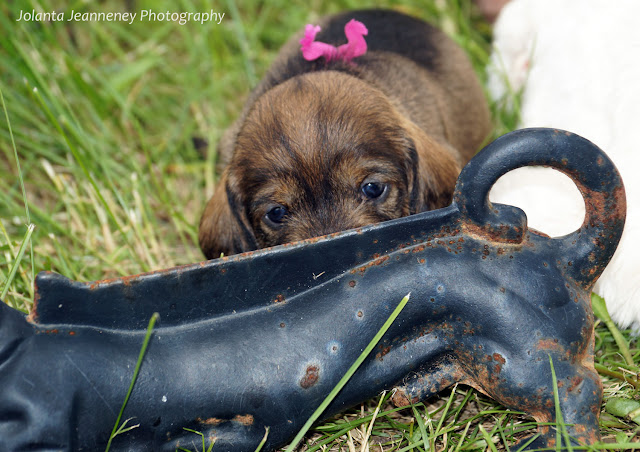 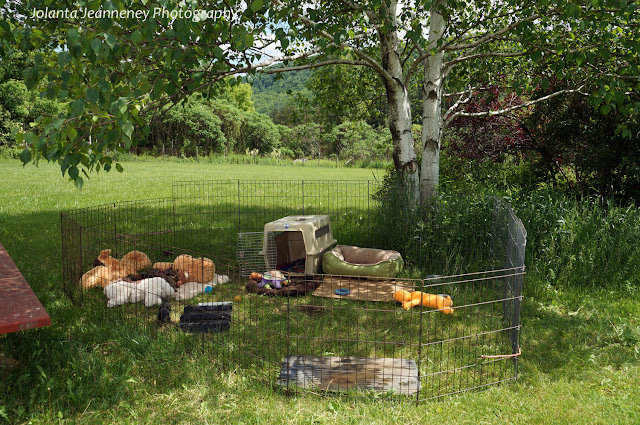 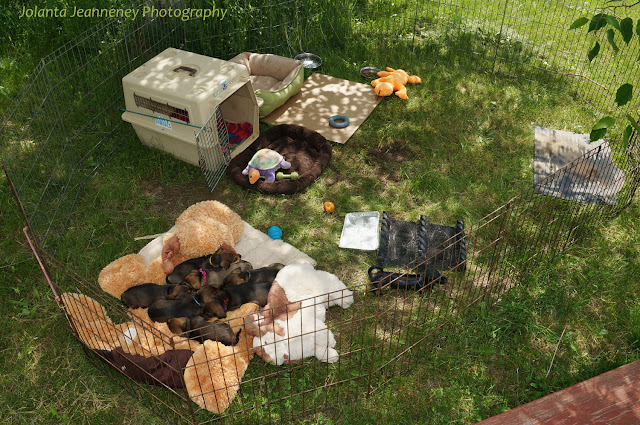 Mielikki is a supermom to her seven puppies

Even though officially it is not summer yet dog days of summer arrived early this year. We have had three consecutive days of temperatures above 90F (30C plus). Now puppies spend part of their day outside in a pen located in the shaded part of lawn. Everybody feels a bit lazy, everybody except for Mielikki.

Posted by Jolanta Jeanneney at 9:09 AM No comments: