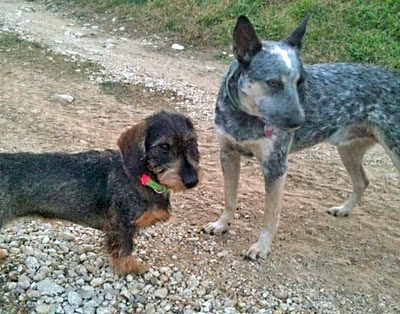 Steve Hardee from North Carolina wrote today with a nice update on Henry (Grizzly v Moosbach-Zuzelek)). "Henry had his forth find and second true find last Friday. A friend of mine shot two deer with one shot. The first fell dead and the second was gut shot. Both were does. We weren't sure if he had actually hit a second deer until we put Henry down on the spot. He tracked to her in less than 4 minutes about 125 yds very thick cover. Not too many deer have been taken this year here, too much rain and warm weather. There have not been as many opportunities to track as I would have liked. I have plenty of frozen feet and blood so we will train if nothing else."

Thank you Steve for sharing news on Henry!
Posted by Jolanta Jeanneney at 10:06 PM No comments: