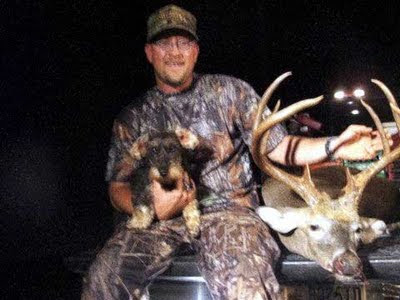 Terry, Pepper and his ~140 class (8point) scored buck!
3rd arrow shot was a perfect kill through chest on the second day of bow season in Henry Co. Georgia on September 13th 2009...
Entered buck in the GON publication's 'Truck Buck' contest for the state opening week.
I (Pepper's blood tracking coach to date*smile*) took Pepper to track because Terry called and said he thought would need the dog to find the deer, but he found the deer before Pepper and I arrived on location.
Pepper was beside herself, growling and intently assessing the situation visually and by scent, before wanting to lavish herself with the fresh meat! She loved it!
Pepper, was quite territorial about the kill which was covered with hundreds of thirsty seed/deer ticks who had just lost their host (so we had to monitor her contact with the deer and limit it to prevent her from also being covered with ticks)! 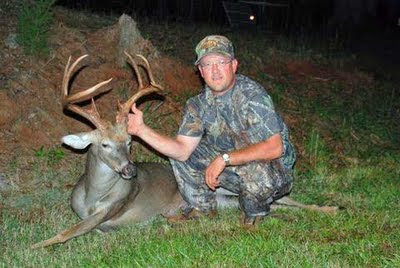 Posted by Jolanta Jeanneney at 9:24 AM No comments: 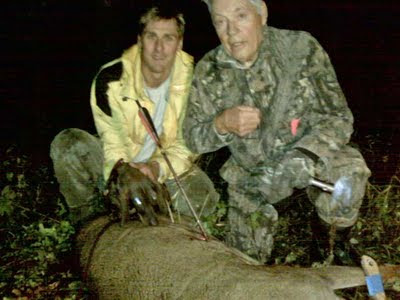 I received a copy of the e-mail that Matt sent to his friends last night:

Without Remi, we never would have found this 8 pnt that Lee shot in the wind and rain tonight. When we got out in the woods at 7:15, it took us 30 minutes to find the first blood, once we put Remi on the blood trail, she took us directly to within 10 yards of where the deer had fallen, about 200 yards of thick swamp from where dad arrowed it. The blood stopped and the deer scent was so strong that Remi couldn't pin point the dead animal. So we just walked in circles from the spot where Remi starting going erratic, and found this huge buck.
Peg helped me haul the monster back, which took about an hour. (Glad I'm having my knee surgery tomorrow.) Check out the blood on Peg's left shoulder in one of the pix, she rocks. :)
No more wise cracks about my serious hound... :) 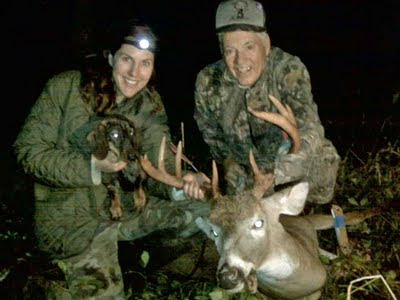 Posted by Jolanta Jeanneney at 8:57 AM No comments: 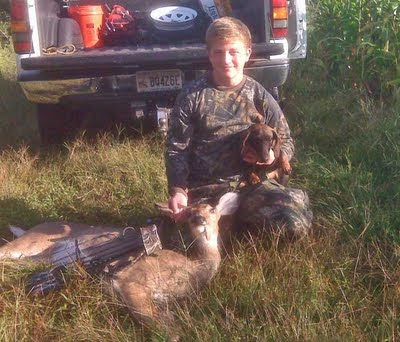 Dustin wrote: "This a picture from our second week of bow season in Kentucky. This is my son’s first deer with a bow. It was quite the thrill for him as well as Greta. This was the first track she has ever been on that there was a real deer at the end. Greta is doing very well and I am very glad that I have her."
Posted by Jolanta Jeanneney at 8:24 PM No comments:

Those who follow this blog know that Doc's (Pushkin's) interest in blood tracking came later than with other pups, but now at 5 months he is doing really well.

His owner Stanley wrote:
I laid a blood trail for Doc at 5:30 p.m. on August 29th. The trail was approx 300 yards long. Let it age overnight. It also came a rain during the night. I took Doc out at 7 a.m. on August 30th, we were walking down a logging road. I had laid the blood trail across this road the day before. When Doc got to the point in the road where I had crossed the road with the blood he hit the trail and was off. The trail I had laid was in weeds and underbrush that ranged from knee high to head high. At times I could not even see Doc and would have to drop the leash to get through the weeds myself. It took Doc about 20 to 25 minutes to work this blood trail to the end. Doc is only 5 months old and this is the 2nd blood trail that I have aged overnight and Doc has successfully completed both trails. Also I have laid a trail that was approx. 1/4 mile long and aged it about an hour. Doc completed it in approx. 15 minutes I try to work with him once or twice a week depending on my work schedule. I AM VERY PROUD OF DOC.
Posted by Jolanta Jeanneney at 5:00 PM No comments: