Lucy (Patti) and her experience on real tracks

Just thought I would check in and get you up to date on Lucy's (Patti's) progress. I have been able to get her out on 5 "real" tracks so far. 3 of the 5 I knew where the deer were and had marked the route. The other 2 were blind tracks. She has managed to make it to the end of every track, some with a little more help than others, but we celebrated them all the same. The long and the sort of it is that it appears that her biggest shortcoming is her trainer. Each outing has provided a new experience and I have "learned" many of the lessons that John cautions about in his book. Her tendency is to work quite fast so our top priority right now is getting her to slow down. The only other issue is that she tends to pitch a fit whenever I go hunting and she doesn't get to come along (which isn't a bad thing unless its 4:30 a.m.). The bow season is just starting to pick up so I anticipate having more opportunities to get her out yet this fall. I will keep you posted on how it goes.

Dan
Posted by Jolanta Jeanneney at 9:49 PM No comments: 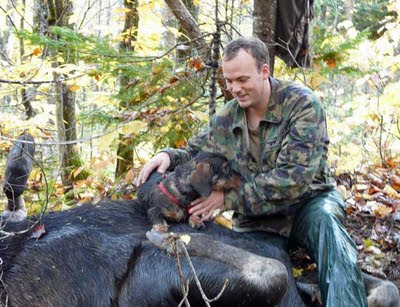 This e-mail; from Guy Marcoux-Filion brought news about Gunner, a six-moth-old son of Billy and Gilda who resides in Quebec:

This story is rather short. Gunner began tracking at the hit site. He stopped at every drop of blood, working very slowly, and as usual he made about a 20 foot circle at the start before taking up the track.
When he arrived at the moose, he stopped and didn’t want to go forward. Then he decided to approach it, and he smelled it without any reaction. The total tracking distance, in very dense cover was about 300 feet.

On the way back the animal was towed by a 4 wheel drive utility vehicle, and in seeing it move, Gunner barked and wanted to jump out of his sac on to the beast. I let him have contact with the moose, and he had already gained confidence. I think that he’s turned on now. He was rewarded with meat from the moose, and he stayed in his sac while we prepared the animal to haul him out of the woods. He is really very calm…

Guy
Posted by Jolanta Jeanneney at 1:43 PM No comments: