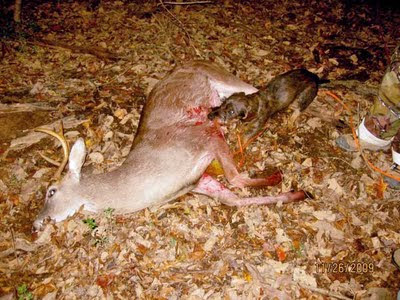 We were very happy to hear from Chris Surtees from Georgia. His tracking partner is Koa (Grock v Moosbach-Zuzelek), an eight-month-old son of Billy and Gilda.
"I shot a small buck tonight while bow hunting in a special archery hunt area and decide to take a chance and put Koa on the trail. As far as blood goes it was a steady easy track but the terrain the buck made his death run through was another matter.

Koa started out fine for the 25 yards but after entering a large ditch he hung a right and broke off trail. I let him go to see what he was going to do and to my surprise he found an easy way out of the ditch and came back on to the trail. While I struggled to climb out of the ditch Koa jumped back in with me and to add insult to injury he gave me a look of I showed you an easy way out and went back out the ditch his way.

Back on track Koa was moving at a good pace, nose to the ground, weaving in and out of the thick brush. Now we hit the next obstacle, another small flood area the deer ran through. Before I reached the area Koa was in the water trying figure out which way the deer went. Once I arrived he gave me a look of I lost the track. We crossed the flooded area, and I worked Koa up and down the back even though I knew where the trail was. I wanted to see if he would pick the trail up or just take off on a false one.

He locked back on the trail and was off again at a good pace. Koa only had one other issue on this track, and that is when my dad and daughter heard me tell Koa he was close. They moved in on my light and distracted Koa from the track. All it took was for me to tell them to stand still and remain quite until he was on the deer.

I put Koa back on the last blood and he finished the trail in grand fashion. He was extremely excited over the deer and enjoyed his tug on just about every part of the deer. To finish it off he was rewarded with a piece of fresh deer heart.

I could not be more proud of Koa and seeing him prance around the house when we returned home I could tell he was proud of himself."

Great job Koa!
Posted by Jolanta Jeanneney at 10:17 AM No comments:

No doubt that the first recoveries by young dogs in their first blood tracking season are going to be very memorable.

I was happy to hear from Rex Marshall from Ohio that Radar (Oak v Moosbach-Zuzelek, a Joeri/Emma son) had a chance to track: "Radar found 2 deer these past 2 weeks, one doe and one 9 point buck! It was really fun and exciting to see him track & to finally find the real deal at the end of the trail. Both tracks were easy. I could follow them both from a standing position & see the blood, but I wanted Radar to track them so he could find a real deer at the end. Both tracks were approx 250-300 yards long. He definitely claimed them at the end--do they ever stop barking?? BTW, yesterday I was called to help track a third deer (buck), but Radar couldn't find that one. Honestly, from the sign I saw, I think the hunter never hit any vital organs and the deer survives today. The arrow must have hit the meaty portion of the upper front leg area cause there was only a spotty blood trail. I haven't introduced Radar to tracking specifically on the interdigital scent gland yet, so was unsure if he was on the right track or not after the blood stopped. He stayed with it for 1.5-2 hours though before we gave up. I'm proud of him for not quitting.."
Posted by Jolanta Jeanneney at 9:39 AM No comments:

Derek Harris called from northern Texas with the news that Poppy found her first deer. The scent line with very little blood was around 400 yards, eight hours old. The deer was bedded and jumped when Poppy got really close. It had to be shot, and luckily Poppy was not concerned about three shots that were fired.

Poppy lives on a ranch, and her best canine buddy is a blue heeler. Derek says that she is fearless.

Thanks Derek for the phone call, and congratulations!
Posted by Jolanta Jeanneney at 8:46 PM No comments:

Stanley Thrasher from Alabama reported that last weekend was opening weekend for youth hunt. Doc (Pushkin) got his first call to recover a deer. The deer was for a 7 year old his first deer it was an 80lb. doe. the little boy was so happy when doc recovered his deer.

The trail was approx. 2-3 hours old. It was about 75 yards out of the clear cut. It was so thick we had to crawl on knees to get through it. Doc had no problem finding the deer. It took him about 5 minutes to find it after he hit the trail. The first thing he did was latch onto the deer's tail and chewed on it then he would chew on a leg. I got Doc off the deer and asked the man to cut the deer tail off for Doc to have as his trophy. Doc did not want the tail he wanted the deer. As the man pulled the deer past Doc he latched onto the deer. The man was pulling Doc and the deer up the hill. I then took Doc and put him in the truck.

Congratulations to Stanley and Doc!
Posted by Jolanta Jeanneney at 8:27 PM No comments: 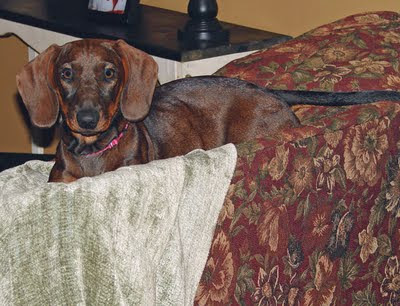 Chris Barr from Indiana e-mailed us this story:

I thought you could use a funny Gerti story that has nothing to do with tracking. We have a wall that is open on each end that separates our kitchen and living room. Gerti has found it quite amusing to play a cat and mouse game with me around that wall. After a few minutes of dodging and weaving, she’ll finally just start barking and chasing me around the kitchen and through the living room. Well, a week ago last night, while playing this game, I was just hitting my stride, probably on my third lap, when I cracked my left pinky-toe on the doorway as I rounded the corner. I went down as if I’d fallen from a building on my knees and elbows. Well, you can imagine, Gerti thought this was just an addition to a delightful game so she proceeded to run circles under my chest and around my head. Dawn and the kids could hardly stifle their laughter. I finally got up and hobbled to the couch where I iced and elevated it for the remainder of the evening. I didn’t have it x-rayed but am pretty sure I broke it as it’s still very swollen and sore. Gerti must have felt a little sorry for me because she curled up in my lap for the remainder of the night and didn’t make a peep.

If you can visualize that, and you’re like my family, you’ll probably get a pretty good chuckle out of it. The next night when it turned all kinds of purple and blue colors, the kids took pictures of it with their phones to send to their friends.
Posted by Jolanta Jeanneney at 8:11 PM 1 comment: