On Thursday Paika spent all day in the whelping box. She did not eat, but when at 7 PM John asked whether I think that she would be whelping that night I said definitely "no". She was not nesting, not scratching the bedding; she did not pant. She exhibited all the signs of upcoming labor last year when she was about to whelp "S" puppies. Then, 5 minutes later, I looked at Paika and noticed that she was having contractions!

So on April 5, she whelped two puppies at 8:40 PM and 9:40 PM with ease (a girl 10.4 oz and boy 11.8 oz), but then we ran into complications. She looked like she was resting for the first half of the night. This can happen though really long intervals between pups' arrivals are not that common (at least not for us). In the second half of the night her contractions increased but no puppy could be palpated in the birth canal. At 4 AM I called our vets, and they asked us to be at the clinic at 7:30 in the morning. It did not look good.

The vet could feel more pups in Paika but no puppy was descending into the birth canal. A C-section provided some answers. The first two pups born on Thursday evening came from the same uterine horn, and when they were born this horn became empty. There were two pups in the other horn, and Paika's uterus at this point flipped and got twisted. The vet said that he sees a similar scenario in the cattle all the time, but he has never seen it in a dog. The two pups were alive and got extracted OK. The girl is vigorous but small 7.8 oz, the boy is very big at 12.8 oz. Because of the flipped uterus there was no way that Paika could have whelped remaining pups naturally. We were so lucky that her uterus did not rupture and we did not lose her.

The last 24 hours have been rough on everybody here so this is going to be a short post. Paika and her 4 puppies are back at home and she seems to be doing well. She has been eating, drinking and looking well after the puppies. 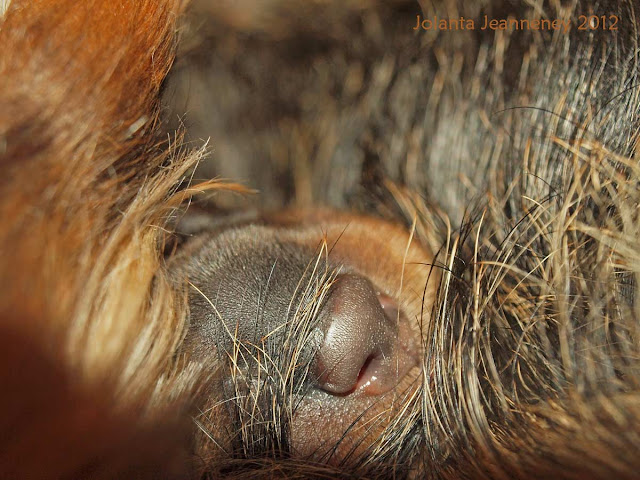 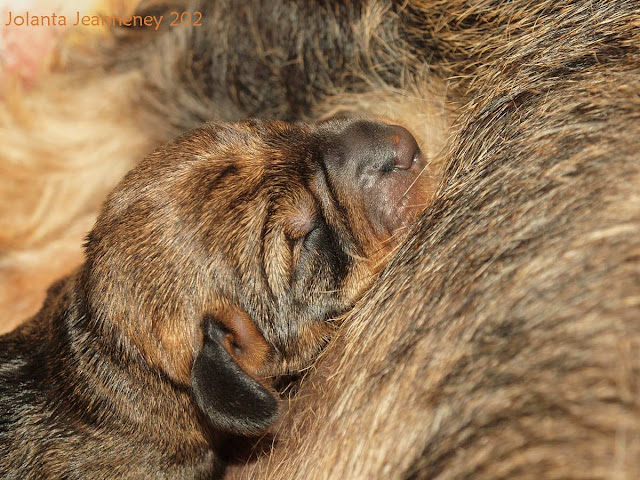 Posted by Jolanta Jeanneney at 12:10 AM

Congrats to your puppies! How luck it didn´t go wrong. Paika is a good Mom and will recover well I think. The pups loos great. Will be nice to follow the puppy journal.

I have been following Paika's pregnancy through your words and images. Thank you! Congratulations on surviving that hard night. We have two standard wire haired, our female is 14, our male is six, so we are thinking to add a pup in the next few years. Meanwhile we will wish yours well, follow your breeding news and dream with you. Janet S. from Brooktondale, NY.