The birth of R-puppies is followed by a sad loss

Yesterday, on May 25, FC Gilda v Moosbach-Zuzelek whelped six puppies, four boys and two girls. The sire of this litter is FC Joeri vom Nonnenschlag. Our females' cycles are synchronized, and they come in heat almost at the same time. Last year we had two litters four days apart, and the same thing has happened this year.

Gilda's first stage of labor started on May 24, around 5 PM. She started to scratch bedding in the whelping box and pant. She was restless. The following day, around noon, I noticed first contractions. 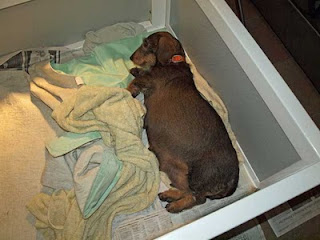 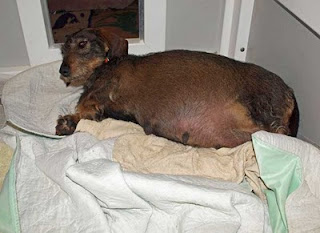 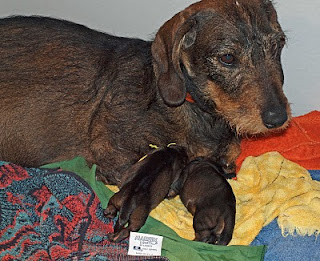 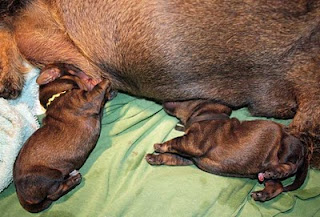 First puppy, a male (Black collar) was born at 1:05 PM; he weighed 12 oz (335 gr). The second pup was a male too (Yellow) and he was born 15 minutes later. He was 9.8 oz (280 gr). After that there was a long break and the third puppy, a boy, arrived at 3:40 PM. He was smaller at 8.2 oz (230 gr). The fourth male (Red) was born an hour later. He was followed immediately by White female (9.2 oz/260 gr). Last puppy, Pink female was born at 6:50 PM (10.6 oz, 300 gr).
Purple boy was the smallest, and he appeared to be a bit weaker. To make things worse he lost a bit of blood because of the injury he sustained when he was born. Gilda cleaned him vigorously, and she pulled his umbilical cord too strongly. It was a matter of seconds and it was an accident. He appeared to be fine for a while, but today he started to deteriorate. Since we don't believe in taking extreme measures to rescue defective and possibly sick puppies, we let the nature take its course. I fed him several times since he was too weak to nurse, but it did not make any difference.  He was not suffering, did not cry or act uncomfortable. Just faded away and he was gone today by late evening. He stayed with Gilda until the end, and she was very good to him. But in the end when we picked him up she did not protest. This was sad, but unfortunately situations like this are unavoidable when you are a breeder. 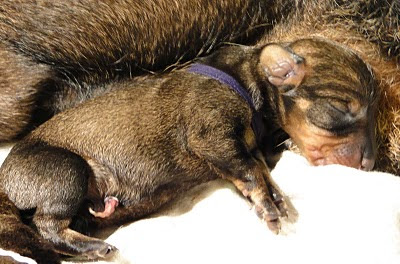 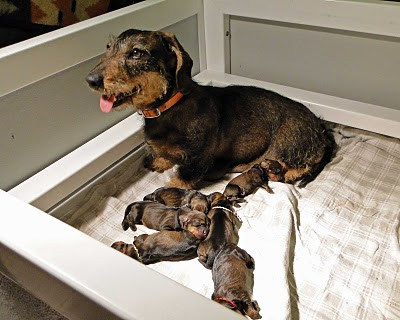 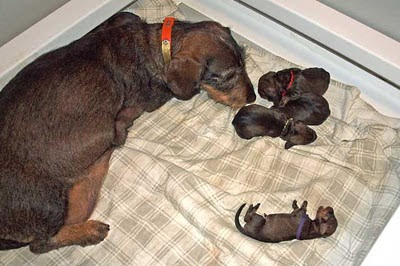 The end of short life for Purple boy.
Posted by Jolanta Jeanneney at 11:41 PM

Very sad, but nature has no emotion, and must take its course.